You are here:
1. Type: Monochrome color pen
The monochromatic color pen is composed of three parts: the barrel, the nib, and the refill. The refill is filled with color water.
2. Two-color color pen
A two-color-colored fountain pen, composed of three parts: a pen barrel, a pen tip, and a pen core. The pen tip is divided into two parts, which can be an inverted structure or a nested structure. Correspondingly, the pen core is also divided into two parts, which can also be an inverted structure or a nested structure. Two-color waters of different colors are filled in the two-part refill. This two-color color pen has a simple structure, and the written strokes have two distinct colors at the same time so that the font has a three-dimensional effect. It can be used for writing artistic characters and art decoration occasions, and it can also be suitable for children to practice calligraphy and increase their interest in calligraphy.
3. Multi-color color pen
The multi-color colored fountain pen is to insert 3 or more refills into the through-hole of the pen head mold according to the design requirements and use the injection molding machine to inject plastic resin into a whole. The roll core of the tightly-capped isolation cover is fixed in the barrel with a gasket, the corrected pen tip is embedded at the end of the pen neck of the barrel, the pen core is inserted into the roll core through the through-hole on the gasket to absorb ink, and then the cap is sealed Seal with adhesive to prevent color mixing with the barrel, pen core, and gasket, and install a color ring on the end of the pen neck. Combining multiple refills in one pen tip can write different colors separately, and will not cross or mix colors when placed. It is suitable for mechanized mass production and is used for beautiful work paintings and teacher lectures. 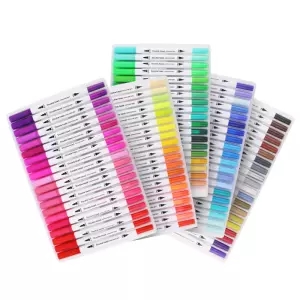 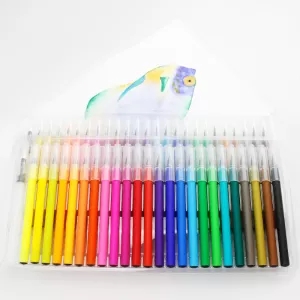